IStat Menus 6 features an all-new weather menu with the current temperature and conditions, hourly and weekly forecasts, notifications, and more. Weather-related notifications can be configured. Go over new changes with iStat Menu's with this new version.

File size: 27.78 MB
iStat Menus lets you monitor your system right from the menubar.
Included are 8 menu extras that let you monitor every aspect of your system. iStat Menus 6 sports a completely new design - new menubar icons, new dropdown menus, and the app and icon itself have all been redesigned to be cleaner, clearer and more at home on Yose. Menubar graphs can now use dark backgrounds, improving legibility.
iStat Menus 5 features read and write disk activity on a per-app basis. Upload and activity is also shown per-app, making it far easier to track down the biggest bandwidth hogs.
Far more detailed network information, including router address, subnet mask, DNS and MAC address. Wi-Fi stats, including channel, signal to noise ratio and many more. Improved GPU monitoring, including active GPU in menubar.
A vastly improved menu, with current , sunrise, noon, sunset, dawn, dusk, sun azimuth, sun altitude, light map and more for over 120,000 cities. Daylight is now indicated in the clock face (it even fades near sunrise and sunset).
Our menubar and dropdown menus are now localised for Arabic, Catalan, Chinese (Simplified), Chinese (Traditional), Croatian, Czech, Danish, Dutch, Finnish, French, German, Greek, Hebrew, Hungarian, Italian, Japanese, Korean, Norwegian, Polish, Portuguese, Portuguese (Portugal), Romanian, Russian, Slovak, Spanish, Swedish, Thai, Turkish, and Ukrainian.
Real CPU graphs and a list of the top 5 CPU resource hogs. CPU usage can be tracked by individual cores or with all cores combined, to save menubar space. Plus, GPU memory and processor usage on supported Macs, and the active GPU can be shown in the menubar.
Memory stats for your menubar as a pie chart, graph, percentage, bar or any combination of those things. Opening the menu shows a list of the apps using the most memory, and other useful info.
A real graph to keep on top of what's being sent and received for all network connections, including a bandwidth breakdown for the top 5 apps.
See used and free space for multiple disks in your menubar. S.M.A.R.T. status monitoring and more detail for all your disks is only a click away. Detailed disk I/O in your menubar, displayed as a graph, a variety of different read and write indicators, or both.
Real listings of the sensors in your Mac, including temperatures, hard drive temperatures (where supported), fans, voltages, current and power. Fan speeds can be controlled, with different rules when on battery power, if you'd like.
A highly configurable date, and calendar for your menubar, including fuzzy clock and moon phase. Open iStat Menus' calendar to display upcoming events, or events for any day. Plus, a world clock with sunrise, sunset, moonrise and moonset s for over 120,000 cities.
Detailed info on your battery's current state and a highly configurable menu item that can change if you're draining, chag, or completely charged. Plus, Magic Mouse, Magic Trackpad and Apple wireless keyboard battery levels.
Weather with current temperature, hourly forecast, weekly overview and so much more.
A compact Notification Center widget, covering some of the popular iStat Menus features.

Earlier this week, our friends at Bjango released iStat Menus 6 — a massive update to the popular menubar-based system monitoring app for Mac. This is a big update since the release of iStat Menus 5 over three years ago and includes an impressive list of new features and improvements — as is expected from Bjango. We’d gotten a sneak peek at the iStat Menus 6 app icon a few days ago.

If you’re hearing about iStat Menus for the first time, there’s a lot you’ve been missing out on. iStat Menus is an incredibly powerful and feature-rich system monitor for Mac from the house of Bjango. It sits comfortably in your menubar and gives you in-depth stats about your CPU, Memory, Drives, Network, etc. The app began its journey all the way back in 2007 and since then, the folks at Bjango have crafted the app into near perfection. Version 6.0 ships with new features such as weather, notifications, hotkeys and more.

Wait! Did you say, Weather!?

One of the most notable addition in iStat Menus 6, and kind of an oddball feature from Bjango, is the addition of Weather stats in the app. The app now reports the current temperature of your location, along with the hourly forecast, weekly overview and more — pretty icons and glyphs included. 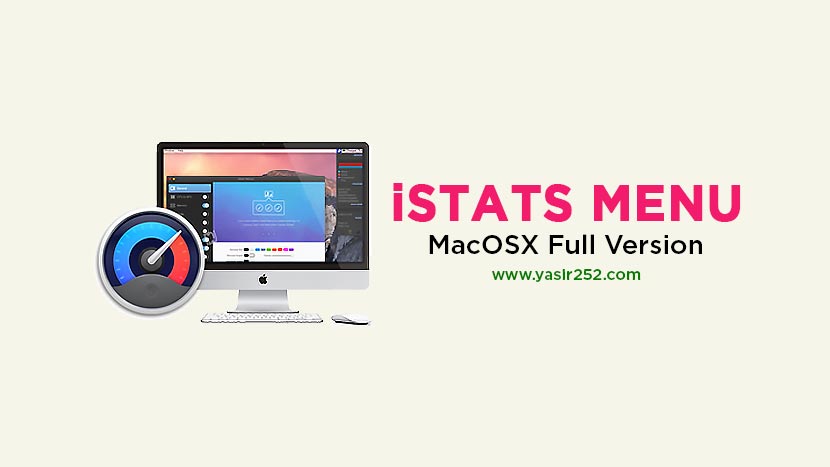 iStat Menus 6 comes with support for custom notifications. You can ask the app to notify you for things like when your CPU usage is higher than X, Memory Pressure is Above X and so on. The app supports a long list of configurable alerts, so there’s a lot to choose from.

iStat Menus 6 now ships with a tiny widget that you can enable in your Notification Center. It’s kinda like iStat Mini and lets you quickly glance at some of the popular iStat Menus features.

iStat Menus has had stunning light and dark themes, but now you can go beyond that and customize the appearance to an extent. iStat Menus 6 allows you to pick the menubar color for the graphs and stats, opacity for the borders, the background color for the dropdowns and dropdown graphs. These customizable settings are available in the Global section in the app.

Similarly, you can now reorder dropdown menus and even set specific hotkeys for each dropdown in the app and easily access them with few taps on your keyboard.

iStat Menus 6 is an incredible update and having used it over the last few days, I can happily recommend it to anyone. If you’re an existing iStat Menus user, the upgrade is just $9 for you. If you haven’t jumped aboard yet, iStat Menus 6 is available for $18 from the Bjango’s website.